The Destroyer of All Matter

A black hole said to be a called a mathematical singularity, but what exactly is a singularity. The mathematics of a black hole fail to describe the shape as does the expression of 1/0. Black holes are singularities in space time. Our own milky way is said to contain a black hole in its center.

However one may ask where is the Galactic center?
The question of the finding where the galactic center is not something that is easily calculated.  However being located at the point that our solar system is, we are able to readily identify the center. Radio observations made of our galactic center reveal a highly sophisticated structure.

A large number of globular clusters and gas nebulae are found at center. The above X-Ray image shows numerous stars and nebulae at the heart of our galaxy, the lighter waves on the left represent nebula's.

The kinematics if stars within the central cluster show that the Milky Way contains a mass concentration of 4 x 10 ^ 6, this almost certainly means there is a black at the position of compact source Sagittarius A*. The acceleration of some these stars in this region have also been measured, for example one star within the region exceeded a velocity of 5000 km/s when it was closest to Sagittarius A*. Most recently in 2012 a new S-star was found with a period of only 11.5 years.

A technical answer to explain a black hole would be to say, it is a solution to Einstein's theory of relativity which describes the gravitational field of mass zero.  A black hole is a compact mass that has a radius smaller than Schwarzschild radius.

One cannot observe the singularity at the center of a black hole. This is because when the distance of a black hole increases, the escape velocity increases, until this velocity reaches a finite speed of light and then at this point the velocity has such reached to such an extent that even light cannot escape hence making it extremely difficult to observe as no light escapes and neither does any radiation. This is one of the reasons even space telescopes cannot directly capture images of black holes, they do however find other sources of evidence that suggest and indicate the presence of black holes.

The first discussion of black holes can be traced back to famous French mathematician Pierre Simon Laplace. Fellow engineers may recall having studied Laplace Transform which is useful in analyzing electronic circuits.


Laplace considered that if we reduce the radius (r) of a celestial body of a mass (M), the escape velocity (Vesc) at its surface will increase. This can be written in its mathematical form below:

From this we can see that for a small radius, (Vesc) will roughly equal to the speed of light. This happens when the radius (r) decreases.

The radius of (rs) is named the Schwarzschild radius. From our above equation we can see that our radius is relatively small about 3km.


The above video shows very interesting simulation of a black hole with (rs) having a radius of 6.03.
At the moment it is quite difficult for us to observe the center of our galaxy but perhaps in the near future we may be able to observe this radius.


Black holes seem to behave like very efficient vacuum cleaners with an infinite limit. But can a black hole go away over time?

There are three stages of a black hole; stellar, primordial and super massive.

A stellar black hole is a region of space into which a star collapse's. So how does a star collapse? A start collapses once it has run out of fuel, this fuel consists of hydrogen and helium which we discussed in a previous post in Interstellar Star Formation.
It collapses to a critical size where any other type of force is overcome by a single force, gravity.

Super massive black holes are what we have been discussing earlier. These are the type that harbor in the center of galaxies. In the order of 100 million solar masses, 100 million times the size of our solar system lay at galactic nuclei.  For stellar black holes they may have a potential lifetime of 10^67 years. Most of these will have gone away by now or perhaps many lurk in far distances where there is an infancy of the universe.

Infinitely strong gravitational forces deform and destroy matter from existence at the singularity, this is a region where physical theory breaks down. Many galaxies show an enhanced brightness in the core, along with various anomalies and high velocity of objects around it, suggest existence of a black hole. Attempts to discover black holes rely on influence of gravitational field of surrounding celestial objects. However black holes that may be easiest to discover are those within a binary system where one can easily identify its influence on its companion star.


There are still many questions about black holes that are yet to be answered. With future development of the space telescope to succeed the Hubble Space Telescope, the James Webb Telescope is sure to uncover many more facets of the hidden secrets in universe.

What is the CMB?

The radiation left from the early stages of the universe is called cosmic microwave background radiation. When the universe was at this early stage, it was soo hot that all atoms in the universe were ions. An ion is an atom that has positive and negative electrical charges. At this point in time the conditions of the universe may have been similar to that of a star; hot, dense and opaque allowing different atoms to pass through it.

Over time as the universe expanded, this gas cooled down. This ofcourse took several hundred thousand years. Radiation that was left behind from the big bang has been able to travel throughout the universe. As this early universe expanded, the radiation red-shifted to longer wavelengths and was therefore in a form to represent different temperatures. The spectrum of the CMB maintains the shape of a Blackbody spectrum. According to writer of http://hyperphysics.phy-astr.gsu.edu/hbase/mod6.html

"Blackbody radiation refers to an object or system which absorbs all radiation incident upon it and re-radiates energy which is characteristic of this radiating system only, not dependent upon the type of radiation which is incident upon it. The radiated energy can be considered to be produced by standing wave or resonant modes of the cavity which is radiating."

The presence of CMB radiation with a Blackbody is a strong indication of the Big Bang theory.

The COBE satellite
The Cosmic Microwave Background Explorer was launched in 1989. Developed by NASA's Goddard Space Flight Center, its mission was to measure the infrared and microwave radiation from the early universe. COBE made some very precise measurements at different wavelengths. These measurements were from a few micrometer to 1 centimeter. 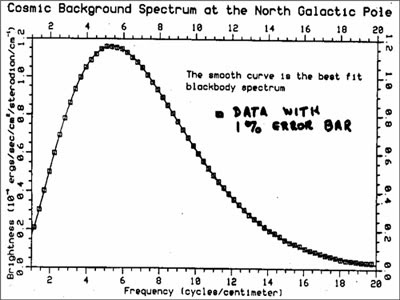 The data on the graph above shows small dots, these small dots are the COBE measurement of the CMB at different frequencies. The X-Axis of the graph represents the frequency cycle per centimeter and Y-Axis represents the brightness of the frequency component. The uncertainty in each measurement is less than size of each dot. The left hand side of the curve that just begins to rise represents data points of a blackbody spectrum.  The above observation matches theoretical predictions of the Big Bang almost with perfection. So much so that there can be little doubt that one is seeing the radiation left behind from a hot, dense beginning from an earlier universe. Researches John Mather and George Smoot were awarded Nobel Prize for this work in 2006.

In 2001 the Wilkinson Microwave Anisotropy Probe (WMAP) made more accurate measurements of the CMB variations.  The above is much more detailed map of the structure of the universe.
In 2013, the European Space Agency (ESA) launched the Planck mission, which went one step further and obtained images in a much higher detail.


Early scientists predicted that, the early universe must have begun as a singularity and then expanded as radiation and elementary particles. However what do we mean when we say singularity?

According to the FreeDictionary a singularity is "a hypothetical point in space-time at which matter is infinitely compressed to infinitesimal volume"
This means matter which infinitely falls toward a negative value making it smaller than any real value.

The Big Bang theory is fundamental to our understanding of the universe. So far it has resisted any efforts made by researchers to prove it false, as the CMB provides evidence of the scenario of our early universe.


Source: Hubblesite.org
Some of the crucial discoveries made by the COBE were:

Pluto on the Horizon

NASA completed a historic mission of New Horizons to the Pluto system this month, which consisted of exploring Pluto and its moon's; Charon, Styx, Nix, Kerberos and Hydra. To get this mission approved it took around 14 years spanning from 1989 to 2003.

Clyde Tombaugh discovered Pluto in 1930 at Lowell Observatory in Flagstaff, Arizona. In Tombaugh's time one could only determine Pluto's orbit and color. Pluto's orbit is 284 Earth years and is very elliptical. At perihelion, Pluto is closer to the Sun than Neptune. Pluto's orbit is locked in a 3:2 ratio with that of Neptune's.

In 1978, Christy & Harrington discovered Charon, Pluto's largest moon.  Pluto and Charon have a rocky core which is encapsulated with water ice mantle. They both are also tidally locked, each having a hemisphere that faces the other.

Not much detail is known about Pluto, but the New Horizon's mission should shed more light in the coming months. Currently around 90% of the data is still aboard the space craft and yet to be transmitted back to NASA communications back on Earth.

Pluto's surface is an icy mix of frozen water, carbon dioxide, nitrogen, methane and carbon monoxide. Pluto also has a very thin atmosphere which holds gasses that freeze when Pluto is further away from the Sun, but when it is closer these gasses heat up.

Pluto and Charon are perhaps a product of an impact between Kuiper belt objects. Both at one time were thought to be close a double planet system.

Pluto is at a distance of 5.9 billion kilometers and has a temperature of -229 °C.


Pluto has a diameter of 2372 km according to recent measurements taken by the New Horizons spacecraft. When we compare this with Earth's 12,742 km, we get an idea of how tiny Pluto really is. Pluto maintains a surface gravity of just 0.063g, while Earth's is 1g.


Nix is a satellite of Pluto which was discovered in 2005 by the Hubble Space Telescope. New Horizons measured Nix to be 32 Kilometers in diameter.

Kerberos is another small moon which orbits Pluto.
If you enjoyed reading this blog, please leave a like, comment or share.
Until next time goodbye for now.
Posted by Junaid Malik at 10:00 No comments:

If you enjoy this blog check out my other blogs.